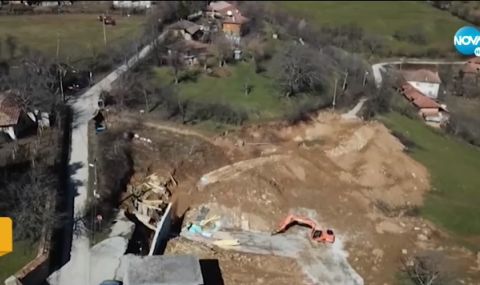 The project to strengthen the landslide was prepared three years ago.

A landslide threatens to engulf houses and a main road in the whole of Veliko Tarnovo. The problem has been going on for 3 years and there are funds for strengthening it. The company that won the order has not been doing anything for seven months now, and it should have been completed in 60 calendar days. Or almost half a year ago. And the landslide is growing, Nova TV reports.

Remzie Chausheva lives right above the landslide in the whole of Kalaydzhii. She has been watching for months as the process approaches her home, and no one is doing anything.

“It’s close to the house. There is – there are not 50 meters and everything is undermining “, promised Remzie Chausheva.

The landslide has started to swallow the main road artery of the whole.
The project for the strengthening of the landslide was made three years ago. The company, which won the public order for nearly BGN 300,000, is from Dobrich. It was necessary to start work in August last year. It is unclear why the construction site was opened only at the end of October. The retaining wall was supposed to be ready in two months. “It simply came to our notice then. You have to act fast. We doubted it for the first time when they froze the object. The problem is in the interruption of the construction works. He was stopped three times in total. As a result, additional slips are obtained. The biggest danger is the interruption on the street “, promised Bogomil Delchev, designer of the site. Both the residents and the mayor of the whole tell about the negligence of the builders. “The equipment that was delivered is a broken excavator. One machine works for two or three hours . It was not serviced and it was delayed for 20-30 days “, promised Biser Kinov, agricultural deputy of the village. Tinsmiths. Nobody works on the construction site. Two workers have a version of the delay: “Another brigade did this. We do not clean mud and water – 70-80 cm. We clean with a hose. We will get there in 2-3 weeks and we will finish “, promised the foreman Dimitar Zhelyazkov. In a written position from the contractor company, the already described facts were recalled and the meteorological conditions for the delay were criticized. And from the municipality of Zlataritsa, in whose land the landslide and the whole of Kalaydzhi are located, they stated that they did not pay the funds in advance and in advance. “All actions upon admission, then there will be an opportunity to maintain the penalty for failure to meet the deadline,” promised Dencho Todorov, deputy. However, this does not reassure the residents, whose houses are in danger.